MIKAY RELEASES HER DEBUT SINGLE ‘’DON’T WAKE ME UP’’, SHE REVEALS THAT WAS INSPIRED BY HER FRIEND’S TRAGIC DEATH

Listen Don’t Wake Me Up HERE

Miriam Kavountzis, known professionally as Mikay is a Greek singer and songwriter born in Greece and raised her first 7 years in Italy in the town Vicenza. She released her debut single Don’t Wake Me Up with art pop, electronic and dream pop elements, on June 24 of 2022 worldwide on all digital platforms. “Don’t Wake Me Up” was written by Mikay and her chief collaborator Foti Katsanos who also handled the entire production. 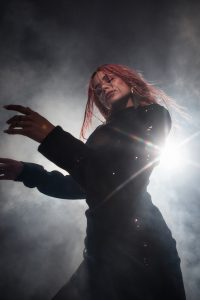 The song has a deeply special meaning to Mikay. The singer revealed that the inspiration for “Don’t Wake Me Up” came from a tragic accident that happened to a young couple she had met in China. The girl survived but her boyfriend didn’t make it. In a recent interview the artist said ”I felt devastated, wondering how anyone could anyone feel after something like this”. She began writing lyrics that time and this was her first script to come to live with the music and Production of Foti Katsanos.

“Don’t Wake Me Up” speaks about the loss of a loved one and how dreams can be so true that the illusion you get from them sometimes gives you courage in things you believe are lost. Mikay wants to bring a healing mood to the listeners.

The music video for “Don’t Wake Me Up” was filmed in China and Greece with directors being Mikay and Foti. The scenes are little stories that evolve continuously throughout the video while projecting the meaning of the song in a more abstract way. The music video will be available on the 26th of June. Mikay and Foti are now under the process of preparing the singer’s debut album which will be released by the end of the year.