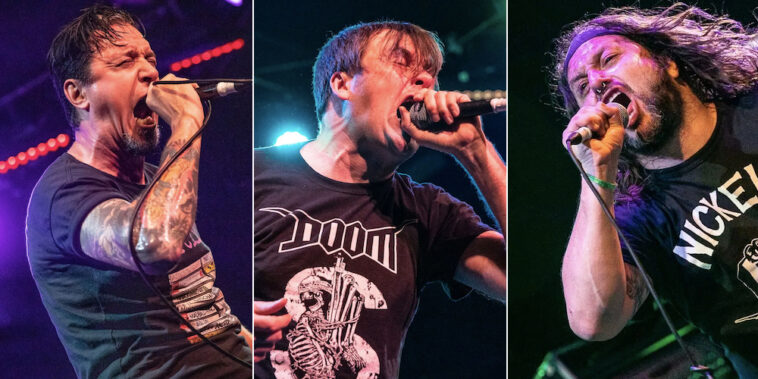 Setting the stage: A diverse cross-section of heavy music fans emerged from the subways and into Manhattan’s Lower East Side for the first of two shows featuring Napalm Death, Sick of It All, and Municipal Waste on Friday. The Bowery Ballroom served as a solid middle ground, central to the boroughs of NYC. The packed crowd was a split between punks, headbangers, and death-metal fans — indicative of the “crossover thrash” of Municipal Waste and the genre-bending brutality of Napalm Death. New York hardcore vets Sick of it All fit somewhere in the middle, combining the attitude of punk with the slamming riffs of heavy metal.

Taking the stage: After locals Subversive Rite and California thrashers Take Offense riled up early attendees, Municipal Waste played to a packed and rowdy room. Opening with “Unleash the Bastards”, they immediately incited a circle pit that threatened to consume anyone standing on the floor. “What is it, 8-f**king-thirty or some shit? We’re already raging,” frontman Tony Foresta proclaimed. He wasn’t wrong. An intense and rambunctious energy permeated the venue, which Foresta stoked and kindled with exclamations like “F**k shit up!” and “Circle-f**king-pit!” before breakdowns and guitar solos. A jovial presence onstage, Foresta wore a smile the entire time, joyfully interacting with stage divers and helping them jump back into the pit. “Did we have enough to drink before the Municipal Waste set?” he yelled. “We’ve got a long night ahead of us.”

A large local contingent was in attendance for Sick of It All, a long-running New York hardcore institution. Primed by the disorder and physical activity of Municipal Waste’s set, the thrashers again turned the floor into a tornadic pit as beer cans, shirts, and other random objects were tossed and strewn into the air. Songs like “Injustice System”, “Step Down”, and the classic “My Life” had the band’s diehard fans shouting the lyrics back at frontman Lou Koller. “Let’s get an old-school circle pit going one way, where the biggest guy in the room goes the other,” he threatened. The lenient security (or lack thereof) gave the show an old-school feeling of danger; anyone on the floor could be swept into the circle pit or bonked with a hurled can of Tecate. Sick of It All are certainly no stranger to that vibe. “The last time we played Bowery Ballroom was 1998,” Koller said. “We got banned when [NYHC pit legend] Rat Bones jumped from the balcony. They thought it was planned, but we had nothing to do with it. Rat Bones was just crazy like that.” While nobody pulled a Rat Bones on Friday night, it didn’t seem out of the realm of possibility.

Napalm Death had the honor of closing out the night, and the grindcore legends weren’t there to reminiscence about the past or goad the circle pit. Instead, frontman Barney Greenway fumed about the stage, writhing in frustration, drenched in sweat, relating words of anti-fascism and positive humanitarianism. These sentiments are more poignant than ever right now, and it appeared to cause Greenway physical pain as he desperately howled against the injustices of the world. The circle pit was still in motion, but it became more tempered as people turned to listen to the music.

The setlist spanned Napalm Death’s massive discography, including six selections from the 1987 debut album Scum — blasts of vintage grindcore that are as politically relevant as ever and still sound brutal. Dips into the band’s more death-metal-oriented material such as the “Suffer the Children” off 1990’s Harmony Corruption were also well received, adding some satisfying tempo changes. Filling in for bassist Shane Embry, who is absent from this tour because of “logistical problems” (per Greenway), longtime roadie and Rigid Records owner Vernon Blake sat in admirably, not missing a note. Meanwhile, Greenway used his platform between songs to offer insight into the band’s lyrical themes and topics: inequality, animal rights, sexual freedom, the evils of organized religion, anti-fascism. A cover of the Dead Kennedy’s “Nazi Punks F**k Off” drove their point home late in the set. After a night that began with silly fun and sick riffs, Napalm Death gave concertgoers some food for thought as they returned to the subways for their commutes back home.

Photo Gallery – Napalm Death, Sick of It all, and Municipal Waste at NYC’s Bowery Ballroom (click to enlarge and scroll through): 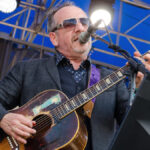 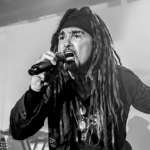