Hi I am DJ Blitz. I’m an Anonymous DJ and I just want to make the best music to keep the edm culture LIVE [◼️‿◼️].

DJ Blitz , is an American electronic music producer and DJ. He first gained recognition by releasing remixes of songs by Galantis & Hook N Sling back in 2018 dj blitz was known off doing small birthday parties to gain recognition after taking a long break in 2019 in 2020 he released his second album called Future 2 , going onto his biggest hit love on me remixed by himself DJ Blitz. 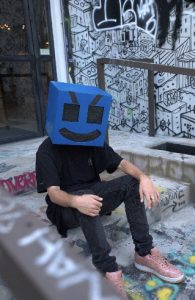 One blue box two blacked out eyes and a cute smile say hello to the new dance hip-pop artist DJ Blitz The anonymous producer / DJ is taking the music industry to a new level with new tracks coming very soon , his positive mind helped him with a lot , he was influenced by another producer / DJ , called Marshmello.

He has always wanted to be a DJ ever since the year 2016 Marshmello dropped his song “Alone”, he saw ultra happening too he couldn’t go because he was too young only 16 years of age, he wants to bring joy to all his new fans and supporters.